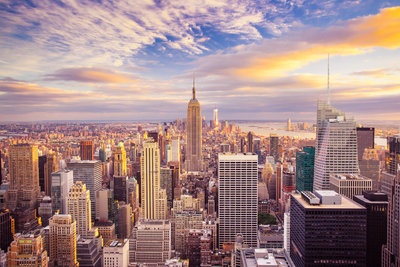 The World’s Largest Ferris Wheel is presently in construction and has reached a construction milestone as its foundation has been completed. The Ferris wheel is being constructed in New York and will eclipse the previous holder of the title, which currently resides in Las Vegas.

The World’s Largest Ferris Wheel has required an impressive foundation that extends to a depth of 11 feet or three meters. This foundation (which was poured in stages) was necessary to hold the sheer weight of the project. Each of the Ferris wheel’s legs weighed 500 tons individually. Concrete projects of this sheer scale are rare, so the completion of the pouring is a major milestone in the construction project. When completed, the project will be a staggering 630 feet tall.

Now that the foundation has been laid, the legs can be erected and the wheel itself can be put in place. This will include the rim, LED lighting, spokes, and everything else that the Ferris wheel is to be constructed of. The pieces themselves have already been fabricated and (like many Ferris wheels) can simply be constructed in place, so the actual creation of the foundation was one of the most important aspects of development.

The pieces of the Ferris wheel are being constructed in Europe and then being shipped to New York, making this piece an international project. Once completed, the Ferris wheel will be facing the Statue of Liberty and will permanently change the skyline of the area. This immense Ferris wheel has been constructed so that it can take aboard 40 passengers within a single one of its cars. This type of wheel is often called an observation wheel because its design is specifically constructed to give passengers an excellent look at the city around them. This particular Ferris wheel will bring passengers high over Manhattan where they can enjoy the entirety of the city. And in an interesting note, a time capsule has also been buried beneath the foundation.

Years in the Making

The Ferris wheel project was initially conceived and developed back in 2012 and was approved in 2013. Now that the foundation has been successfully completed, it’s likely that the project will be going up on schedule by late 2017. This will be exciting not only for New York residents but also those interested in tourism. Staten Island is an area that is generally used by commuters, so this will draw out more tourists and visitors around the region.

When it comes to attractions like this one, safety is absolutely necessary. This Ferris wheel will be the tallest in the world, and this can represent some significant safety challenges during construction and assembly. It’s for these applications that Pucuda Leading Edge constructs the best industrial and safety netting supplies. Contact Pucuda Leading Edge for information about safety netting systems today.