Construction Site Safety: Then and Now 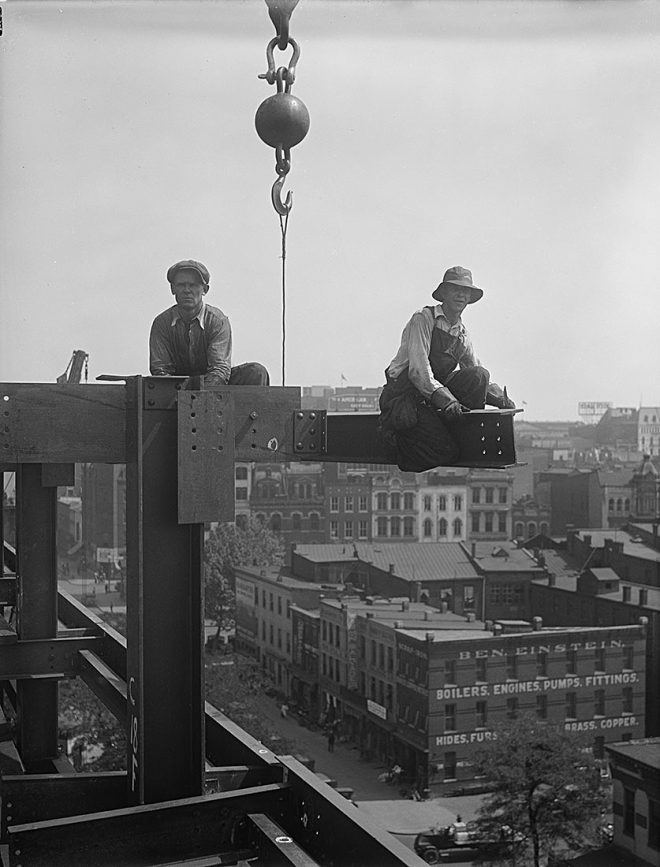 Work site safety has dramatically changed and been improved in the last 100 years. But only because workers fought for the institution of safety requirements in industries such as mining, steel production, construction and general manufacturing.

There were no generalized requirements for construction safety, or fall protection netting on construction projects. Children routinely worked in nearly every field of manual labor until 1938 when The Fair Labor Standards Act was passed and a minimum working age of 16 years old was established.

In the late 19th Century, steel had virtually replaced wood and stone as the primary building material in the erection of bridges and buildings. At that time, for about two dollars per day, a worker could risk his life on high structures. With the rise of the industrial revolution and steam power, the use of crane use in construction became commonplace.

The cranes were used to hoist steel girders into place, and the iron workers used rivets to connect the girders to the columns of a structure. The mortality rate of iron workers was the highest of all building trades, and they would be lucky to go 10 years without a serious or fatal injury. At the end of the 1900s, the International Union of Ironworkers would emerge from concern for safety on the job and the lack of protection for workers.

During the 19th century and throughout the 1930s, laborers rarely wore safety headgear in construction or mining operations. Ironically, during World War I, nations equipped millions of their soldiers with combat helmets, but failed to see a need for similar protection for construction workers back home. In 1910 New York State was the first state to pass a Worker’s Compensation Law that set fixed rates of compensation for injuries on the job. After this initial first step, 44 states passed workers comp laws between 1911 and 1921.

Just after World War I, the E.D. Bullard Company, a mining equipment firm, designed and patented a “hard-boiled hat” made of steamed canvas, glue and black paint. During the construction of the Hoover Dam in 1931, hard hat use was mandated by Six Companies, Inc. In 1933, during construction of the Golden Gate Bridge in San Francisco, construction workers were required to wear hard hats, by order of Joseph Strauss, chief project engineer. Strauss, a safety visionary, strove to create safer work conditions by installing construction safety nets and requiring hard hats to be worn while on the job site.

But work site safety issues and injury rates rose and fell during the Great Depression and during World War II with employee turnover and economic booms. Safety was less important on work sites during strong economic times as companies pushed productivity while trading off on workplace safety. It wasn’t until after World War II and the growth of powerful labor unions in the United States, that safe workplace conditions became an issue that led to legislative action.

In 1970 The Occupational Safety and Health Administration (OSHA) was established to monitor and record workplace accidents and injuries. Its mission was to establish federal safety guidelines for all industries. While individual states, may have their own safety requirements, they are required to meet the minimum Federal standards as written by OSHA. While some industries may complain about federal overreach, there is no doubt that the guidelines which OSHA produces have saved many lives and prevented countless workplace injuries over the years.