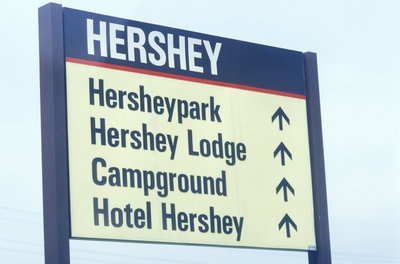 Hershey Park has recently released its new ride… which turned out to be three exciting “choose-your-thrill” theme park adventures. The Hershey Park teased guests early in July of 2016 with a new mystery ride that would be opened at the park in 2017. It’s now been revealed as the Triple Tower, much to the interest of avid theme park goers.

Hershey Gets Sweeter With the Triple Tower Ride

The Triple Tower Ride offers three free-fall drops ranging from different heights. The Hershey Kisses tower sees 12 people and sends them on an exhilarating 80-foot drop, while the Hershey Reese’s Tower will drop 16 riders a total of 131-feet. But the true daredevils will want to jump on the final Hershey’s Tower, which seats a total of 20 individuals. Nearly two dozen people will be dropped 189 feet. Though the heights differ, the speed does not. All three towers drop the guests 45 miles per hour. Nevertheless, they can still decide exactly how far they want to drop and how many people they want to share the experience with.

The Tallest, “Most Thrilling” Rides

The new Triple Tower ride will be the tallest non-roller coaster ride in the Hershey Park. The rides themselves will accelerate the passengers to the top and then drop them, differentiating it from the classic “drop” ride. Hershey Park is located in Hershey within the Derry Township, and was initially developed in 1970. Since then, it has expanded and been developed in accordance with new theme park breakthroughs and modern designs.

Current rides and attractions at Hershey Park include their roller coasters, boardwalk, water rides, family rides, and kiddie rides. The most similar rides to the Triple Tower are the extensive selection of 13 roller coasters, which range from the relatively slow-paced Cocoa Cruiser to the 200 foot Skyrush. More sedate family rides include the classic carrousel, the coal cracker, and the “fender bender” bumper cars. This new mystery ride will round out the thrill-seeking rides for Hershey Park, making it far more attractive to those who are looking for an adrenaline rush. It will also stand out against the more traditional roller coasters situated throughout the park.

The construction of the three towers is slated to begin after Labor Day and will be completed sometime in 2017. In order to accommodate these brand new, exciting rides, the Hershey Park will be moving some other rides such as the Kissing Tower Hill. The park will also be removing the Flying Falcon. The construction of theme park rides does generally take quite a few months, but this is necessary in terms of safety. For the workers on the Hershey Park mystery ride, safety equipment such as protective netting will need to be used throughout construction. Pucuda Leading Edge offers protective mesh netting ranging from 3 1/2″ to solid netting structures, perfectly designed for the building of any large structures.